The hype around tummy time: is it really that important?

Being a first time mum can be hard. Everyone telling you that everything you do, or do not do will affect your little ones development, then there is the added confusion brought on by what the previous generation did with their babies. For me, one such thing that comes to my mind is the hype around tummy time. On one side was every nurse, GP and pediatric professional urging me the importance of tummy time and on the other side was the mirage of mums and aunties who suggested that they did nothing of the sort and we all grew up fine.

Frankly it would have been way easier to brush off the professionals and go with my mums and aunties because its heart breaking when you have a baby that screeches every time you put him on his tummy. But here is the catch, I am a physiotherapist so obviously my mind would go for the latest research and evidence: A systemic review of research on the benefits of “tummy time” for infants has found that it improves total development and gross motor development, and prevents brachycephaly (where the back of an infants’ head is flattened as a result of spending a lot of time on their backs). The study was led by Dr Lyndel Hewitt from Early Start at the University of Wollongong (UOW) and the Illawarra Health and Medical Research Institute (IHMRI), and is published in  the journal of Pediatrics . It further states that “When an infant is on their tummy, they are given the opportunity to practice lifting up their head, lifting up and turning their head, moving their legs and pushing up with their arms”. Ref: Hewitt, Lyndel Louise, Tummy time, health and development in infants, Doctor of Philosophy thesis, Early Start, University of Wollongong, 2019. https://ro.uow.edu.au/theses1/743

In the words of Dr. Hewitt, “Tummy time strengthens the infant’s head, neck, shoulder and trunk muscles they will need to master motor skills such as their overall ability to move, crawl and roll.”Ref: Hewitt, Lyndel Louise, Tummy time, health and development in infants, Doctor of Philosophy thesis, Early Start, University of Wollongong, 2019. https://ro.uow.edu.au/theses1/743 While tummy time was known to help infants’ motor development, the benefit of the systemic review was in showing which specific aspects of motor development it improves. World Health Organisation guidelines for physical activity, sedentary behavior and sleep for all children under the age of 5 years recommend infants get 30 minutes of tummy time over a 24-hour period. 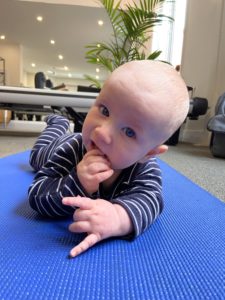 What exactly is tummy time?

As the word suggests, tummy time is simply the time spent by the infant on his/her tummy  (prone). Dr Hewitt advised to start small (30 seconds) and gradually increase the time the baby spends in tummy time. However, it is of utmost importance that they are awake and supervised by their parents or carer during tummy time.

So, if your mothers and aunties didn’t do it and we all grew up fine, when did it all start?

The recommendation for tummy time came about in response to the American Academy of Pediatrics’s 1994 “Back to sleep” campaign. The campaign was life saving as it advised parents to put the babies to sleep on their backs at all times and led to a drop in sudden infant death syndrome. However, many babies were  stopped being placed on their tummies at all, and pediatricians started to see a rise in infant torticolis, a condition in which a baby’s head constantly tilts to one side; as well as plagiocephaly, a flat spot on the back of a baby’s skull.”

Lots of studies were then conducted which led to the evolution of the term, tummy time. Some studies also suggested that the babies who spent more time on their tummies developed gross motor control much faster along with the neck control. However, the researchers who conducted a study in a 1998 study found that the back-sleepers eventually developed their motor skills just fine: “All infants achieved all milestones within the accepted normal age range,” they wrote. Thus, proving our mums and aunties right!

So why bother to keep them uncomfortably on their tummy?

Interestingly, researchers have also found links between babies’ gross motor development  and cognitive development, which raises a quintessential question in every parent’s typical brains; are the babies with more tummy time smarter?

Let’s look at it this way, if the  baby’s gross motor development i.e: the ability to roll, crawl, sit, stand and walk is improved so is the ability to explore the surroundings . As Dr. Catalino from a 2014 study explains that “babies move to learn”,  so if they explore more, they are more aware of their  space and direction which helps building a specific skill that is spatial memory. Studies have found that infants who are able to sit up have more understanding  of the three-dimensional nature of objects, perhaps in part because they can move and inspect their toys. A 2014 study found that babies often learn to walk right before they learn language skills — so if they learn to walk later, they might talk later too.

Now that we know the science behind tummy time, time to troubleshoot.

My baby hates to be placed on his tummy, what do I do?

Well, when a baby is clearly unhappy to be on the floor and screeches his/her lungs out you simply place it on your chest and coo and sing and talk to them. They love all the attention , eye contact and skin contact. Don’t we all?

Gradually, as you increase the time on your chest try to place them on the floor and lay next to them and continue to interact in the same attentive way. Gently go from there to placing them on a big exercise ball and have them look around at toys. By month 3-4 they will have developed enough neck control and would want to weight bear on their hands happily, you can read them books and make a family time out of it.

With kids with reflux it gets very challenging to make it experimental so make it short sessions on your chest throughout the day. Eventually it all adds up.

And even if you don’t, or you cant get in a lot of tummy time due to any reason, don’t fret. We grew up just fine. Didn’t we?

Note: If you have child with flat skull, is at risk of developing flat skull or you suspect them to have delayed motor development feel free to give us a call and we can get you an appointment with a physiotherapist.

“Parents are advised to see their doctor, pediatrician or physiotherapist for a motor development assessment to determine if their baby is meeting their milestones.” 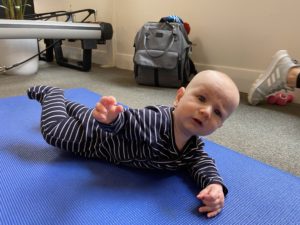 Urvi has a special interest in paediatric physiotherapy. Please click here to book an appointment.

Posted in News, Uncategorized
← We are looking for a Saturday Physio!Best preparation for skiing and snowboarding this winter →